Behind the Design: How a ‘Star Wars’ Fan Turned Her Love of the Film Into The Rebellion Rug

The Rebellion Rug transports people to a “galaxy far, far away” with its Star Wars-themed design. Featuring three of the Rebel Alliance’s most iconic starships—the X-wing, the A-wing, and the fastest hunk-of-junk in the galaxy, the Millennium Falcon—this illustrated design captures the motion of the battle as the starships fly through space.

Joni Pratte, the designer behind The Rebellion Rug, got to showcase her love of Star Wars while bringing the rug to life. Here, she tells us the inspiration behind the design and how she brought her vision to life.

One of the things I really loved about designing this rug was the process. I got to use all of my art skills.

The Rebellion Rug is really special to me. It’s my very first Ruggable rug and the process of getting to paint digitally and know that it’s going to be on somebody’s floor in somebody’s home is just amazing. It’s pretty much the best feeling ever.

I happen to be a big Star Wars fan and looked to The Empire Strikes Back. The inspiration behind The Rebellion Rug was to do something that shows the rebel side versus the dark side and something that would show motion like the movie. I wanted you to see the Millennium Falcon jumping to lightspeed in a really expressive way.

The brush strokes showing the movement were really important to me, but also the layering of color so that you can see some of the depth and detail of the jet stream coming off the Millenium Falcon. It was also about capturing that true scale, the size of the Millenium Falcon versus the A-wings and the X-wings.

For The Rebellion Rug, there were a few iterations. We really worked on the composition first. When I thought about techniques for designing this rug, I thought about painting styles, whether it’s impasto with really thick paint, or painterly style, with really dramatic brush strokes.

I was inspired to do The Rebellion Rug in a painterly style because I wanted to show motion and really have that motion translate in our rugs. I decided to take my painting digital so I could manipulate getting big, broad brush strokes and some fine detail.

How to Style The Rebellion Rug

There are so many ways to use The Rebellion Rug.

In the Hallway: I love the idea of placing it in a long hallway. It’s that Millenium Falcon, light-speed down your hallway. Who wouldn’t want that leading into your kid’s room?

In the Entry: Another way I would style it would be to use it as a runner, leading right from the front door into the house, bringing everybody into your space.

In the Office: It would also look great in an office, which is usually pretty clean but you want to show movement. That to me is important. You want to be led into a room, so having that lead you into your workspace each day is on the money.

In the Dining Room: I can also really imagine The Rebellion Rug under someone’s dining room table, including mine. Put it under the table and people are going to be interested to see what’s underneath the chairs. It will really bring to life your dining room. 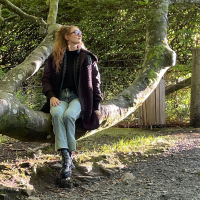 Michelle Gant
Michelle is Ruggable's Content Manager. When she isn't browsing antique stores for home decor, you can find her sipping red wine, snuggling with her rescue pup, or plotting her next adventure. The Best Fall Rug for You Based on Your Zodiac Sign
September 26, 2022 Something Faux-bulous Is Coming: Get a Sneak Peek at Our Wildest Collection, Yet
August 1, 2022